It’s taken a lot of time, decision and thought to start this blog. As a mother, one needs to consider the perils of ‘child exploitation’ and your own child’s wants and needs. Believe me, I’ve considered this. I’ve spent many rainy afternoons sipping tea and weighing the pros and cons of going public (perhaps very public) with our medical battle, and – surprise surprise – promoting awareness has won.

And so begins our story about Ava. Otherwise known as Ava Joy… Who entered our lives on December 18, 2009 weighing in at 7 lbs. 11 oz and loudly announcing her own arrival. 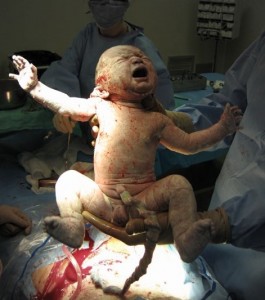 The day after Ava’s arrival we were all recovering in our room, vaguely aware of nurses coming and going. Checking vital signs, giving instructions on breast feeding and checking to make sure mom and baby were doing okay. At some point during the second day our obstetrician, Dr. Rob Anderson came in to do a personal follow-up. Brian was in the cafeteria and Ava was sleeping in her bassinet. He apologized on behalf of the attending pediatrician and told us he was surprised she’d mentioned Ava’s craniosynostosis during the operation. I replied with a groggy… “I’m not sure what you mean?” (let’s face it, I wasn’t exactly at the top of my game). He started to back peddle and mentioned there’s a possibility that Ava “could have something called craniosynostosis, but probably not… We’ll get her checked our more thoroughly shortly. Either way, we should have waited to discuss with you until after the surgery.”

Next thing you know, we had brain ultrasounds, two more pediatricians and soon a head x-ray all within 2 days. Turns out Ava did have craniosynostosis, meaning her bones in her skull had fused in utero, leaving no ‘soft spots’ and no room for her small brain to grow. They still don’t know what causes craniosynostosis, though it’s thought to be a combination of genetics, intra-uterine constraint and random occurrence. Ava’s particular type of synostosis is something called bi-lateral, lambdoid, sagittal synostosis, or BLSS. Many of the doctors simply refer to Ava’s condition as ‘Mercedes Benz Syndrome’ because the fusion of her skull plates resembles the Mercedes Benz symbol.

We received all of this information on or around Christmas Eve, and we spent a very tired and emotional 2009 holiday season processing this information and riding a roller coaster of extreme gratitude for a beautiful baby girl and extreme fear for what the future holds. We held hands in the night, learned some scary big words and spent a lot of time reading and Googling.

In early January we met with Dr. Paul Steinbok, Chief Pediatric Neurosurgeon at BC Children’s Hospital in Vancouver BC. He ordered CT Scans and MRI’s and examined Ava’s head with the gentle hand of a familiar friend. He explained to our pale, tired faces that craniosynostosis often requires a surgery; a very long and major surgery in which skull plates are broken apart and reshaped to allow for brain pressure to decrease and brain growth to occur. I asked some questions from a shaking and crumpled piece of paper and he replied patiently, if not somewhat rehearsed:

“How long is the surgery?” “6 hours.” “Will she need a blood transfusion?” “Very likely.” “Will there be other doctors?” “Yes, my two attending neurosurgeons and myself.” “Will there be a plastic surgeon involved?” “No, we don’t feel it’s necessary.” “Will she need to wear a helmet?” “It’s possible.” “Why are you doing the surgery at three months, isn’t that really young?” “That’s the optimal time. We don’t want intercranial pressure to affect her development.”

We didn’t ask about mortality rates. But it was on my list.

Soon after, we received our first of many CT Scans. “What are the small holes we can see in the skull bone?” “Those are perforations made by the brain. It needs to grow somewhere.”

Dr. Steinbok was soon able to determine exactly what kind of synostosis he was dealing with; while the MRI gave him an ‘arterial road map’ and also flagged a Chiari Malformation at the back of Ava’s head. A Chiari Malformation is a tonsillar herniation of cerebellum, meaning the skull has squished the back of her brain and created a herniation down near where her spinal column starts. Dr. Steinbok assured us this was fairly common with Mercedes Benz Syndrome and would likely be relieved with the surgery. He referred us to a geneticist and an infant development specialist and sent us on our way. 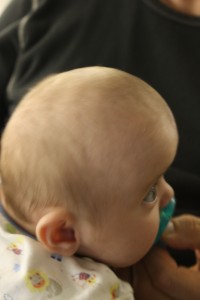 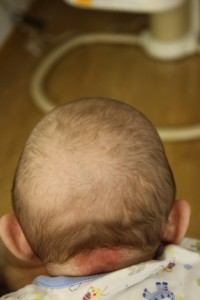 This entry was posted in Uncategorized and tagged craniosynostosis. Bookmark the permalink.