After Ava’s surgery, we were both amazed at how quickly she healed. Her swelling subsided very quickly and her stitches dissolved within 2 weeks. 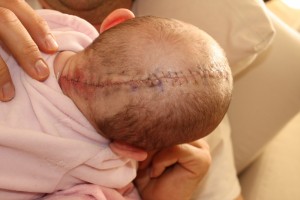 While in the hospital, Ava was taking small amounts of morphine through an IV. After one day, she was just on children’s Tylenol. Amazing!

We spent a lot of time at the hospital and after four days we were allowed to bring her home. She continued on the children’s Tylenol and we monitored her for fevers, or any unusual discoloration or swelling.

As mentioned – her recovery was remarkable. We had a few sleepless nights, but all in all, she was a tough little trooper and before long, it was as though she’d never had the surgery.

By six months, Ava still didn’t have a lot of hair (go figure), so her scar was still visible but her development was on track and most people would have never suspected the path we’d just traveled. She was crawling around like a champion and our infant development specialist was very pleased with all of her smiles, and motor development milestones.

Ava’s always been a good sleeper, and by six months, she was right back on track with 8 to 10 hour nights. Lucky us! She’s also always had a healthy appetite… Anyone who knows us knows that we like to joke about her affinity for ‘groceries’ and our pet names for our little ‘plus-sized princess’.

Ava has a favorite stuffed animal she was dragging everywhere with her and if we asked her to ‘go get monk’ (a decrepit lime-green stuffie) off she’d crawl in search of her faithful friend.

Some nights I’d sneak into Ava’s room and watch her sleep. I’d whisper stories to her about how proud I am, and how many hopes I have for her.

About two months after Ava’s surgery we sent a letter to Dr. Steinbok telling him how grateful we were. I told him that we had given him a very sick baby with a serious medical condition and he gave us back a healthy little girl with a promising future. The e-mail didn’t feel quite adequate enough, but it was both cathartic and necessary. 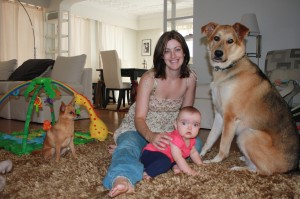 Ava and more of her faithful furry friends

With the days flying past, we started to plan for Ava’s first birthday and her 12 month post-op check-up with Dr. Steinbok. Ava was making us laugh DAILY with her antics and sunny personality. To this day, I have never met a child with so much joy and light! 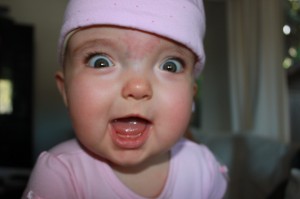 We were still visiting the hospital on a fairly regular basis to provide blood work for genetic testing and also to consult with speech therapists and plastic surgeons (on the advice of our pediatrician). They were concerned that Ava may have something called Loey’s Dietz Syndrome which often accompanies craniosynostosis. Because Ava has a ‘bifid’, or split uvula,  and multiple fusions with her craniosynostosis, the doctors were concerned this may be representative of a larger syndrome (other than the simple Mercedes Benz Syndrome). After researching half the night away, I discovered that this particular syndrome carries a very high rate of infant mortality due to aortic aneurysms! Just one more worry to add to our list.

Brian and I gave blood and went back and forth several time to see if there might be some greater reason behind Ava’s medical condition.

Three weeks later the tests came back… negative. There was no known cause. At least not that we could find. In some ways this was great news (she doesn’t have LDS!) but in some ways it wasn’t (what does she have? does she have… something?).

It appears the reason behind this may always be a question mark in our lives.

In terms of speech development, they are monitoring her. Ava’s split uvula is on the cleft palate ‘spectrum’ but it may or may not affect her speech down the road. For this one, we will likely have to wait a few years.

When Ava was about 10 months old, I made an appointment to go back and see Dr. Steinbok with her. I wanted him to evaluate her head growth and provide me with his thoughts. It was appearing to me as though her forehead was ‘bossing’ or ‘bulging’ somewhat, and I wanted his professional opinion on whether or not this was something of concern. He didn’t feel it was. I asked him about helmet therapy and he didn’t feel that was necessary either, as it likely wouldn’t have much affect…

So we headed back home (the car pretty much driving itself) pleased that it appeared as though we were out of the cranio woods.

It was during one of my appointments with plastic surgeon Dr. Bush at BCCH that I pointed out Ava’s forehead and asked him what he thought about the bulging. I pointed out where it was happening right above her eyebrows, and – though the back of her head looked good – we were concerned this might get worse as she gets older. His response was not what I expected… 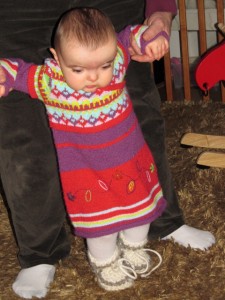 Dr. Bush told us that Ava would not benefit from helmet therapy because significant time had passed since her surgery, but was probably a candidate for another cranial vault reconstruction. This time it would be an ‘anterior’ CVR and would likely be an ‘aesthetic’ surgery designed to correct some of her abnormal head shaping. He suggested we arrange another appointment with Dr. Steinbok and readdress it. Dr. Bush said we “need to have Paul Steinbok on board, he’s her neurosurgeon and that’s how things work here at BC Children’s Hospital”. He said we should try and get another CT Scan and go from there.

I went out to my car and cried and cried. This was now January of 2011. I was not expecting this news, and this was one of the darkest moment I’ve had. I thought I was just being a paranoid mom, but apparently, other professionals shared my opinion about her head shape. Dr. Steinbok thought I was being ‘anxious’, but Dr. Bush thought I was correct. I didn’t know which was worse.

This entry was posted in Uncategorized. Bookmark the permalink.

54 Responses to The Other Side